LENSOGRAM
LENSOGRAM
Thought Catalog > Learning from Impressionism 1
European Painting 1850-1900 – Chapter 1
I have always wondered about paintings ever since I began to pick up a book when I was six.  Back then, books with only words bored me but I could not stop flipping all those pages and spending hours looking at books filled with paintings, illustrations and interesting graphics.  Paintings, in particular, fascinate me not only because of the great variety of their visual appeal, but also for what they are trying to communicate.  Looking at a painting long enough, I find myself drawn into a world in which the painting represents.  It is like stepping into a world with its unique space and time qualities that only the painter knows how to create.  For me, looking at paintings is a process of profound understanding.  On one hand, we can dissect how painters apply their mastery skills to ocument what they see or imagine; on the other hand, we can unlock the message that lies within each painting.
It is obvious that painting changes over time.  Changes include the technique of applying pigment, the method of representation of the outside world, subject matter, to name a few.  Given the political, religious and social atmospheres evolving continuously in history, it is reasonable to assume that paintings will also evolve and continue to reflect those changes.  However, from 1850-1900, European painting went through a more radical re-thinking than any other period before then.  A cursory review of this period will inevitably encompass a spectrum of paintings ranging from neo-classical realism in the 1850s, all the way to the dawn of modern abstract painting by 1900.  In just 50 years, the great academic tradition of western painting was increasingly superseded and substituted by a radical school of abstractionism that the world had never seen before.  What drove the painters in that period to abandon the tradition, and how did abstractionism become the vanguard of the western painting at the turn of 20th century?
Visionary Romanticism
To answer these questions, we shall first discuss the general characteristics of painting just prior to 1850s.   In searching for their basic characters, I look back to Claude Lorrain in the late 1600s.  Lorrain was an established landscape painter.  His landscapes were often treated with a sense of calmness and tranquility.  Although historians had classified his work under the Baroque period, he was credited as a pre-romantic painter for his inspiration contributed to future Romanticism. 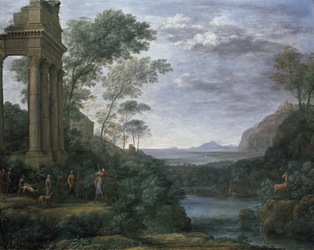 Fig.1 Lorrain, Ascanius Shooting the Stag of Sylvia, 1682
Typical in Lorrain’s paintings, vistas into the far distance were set up to represent the depth and vastness of the landscape.   The soft and glowing light created the magical romantic atmosphere.  “Ascanius Shooting the Stag of Sylvia” in 1682 (Fig.1) is an example of such work.  In this picture, Lorrain painted nature right next to the ruin of the antiquity and forced the viewers to contemplate our fertile man-made endeavor as represented by the ancient ruin in the context of the eternal landscape.  For Lorrain, man could not recognize their fertility despite its mounting evidence; and he lamented such blind-sighted ignorance by using the seemingly harmless pleasure of hunting as a gentle reminder of our constant exploitation of nature.
We need to recognize Lorrain’s genius in delivering his admonitions in such a poetic manner.  The painting penetrates and appeals to our conscience at the same time.  And there lies the power of romantic painting, which is not about actuality but about poetry to excite our innate yearning of an ideal vision.

Imaginary Rationalism
By late 1700, the return to the Roman antiquity was the primary source of inspiration, which led to a period of resurgence in classicism and classical knowledge.  It was also a period of enlightenment and rational thinking.  Rationalism gradually overtook Romanticism and ushered in the neo-classical period.  Borrowing heavily from the Roman stylistic precedents, Neo-Classicism espoused a rational approach to painting with a clear intent supported by equally clear compositional logic. 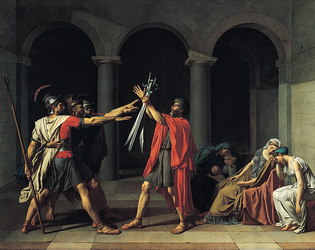 The “Oath of the Horatii” By Jacques-Louis David in 1784 (Fig.2) is a good example of this period. The theme of this picture was a scene of the story of the Horatii swearing on their swords, in front of their father, in defending Rome to their death.  This scene of loyalty to the State unto death was later considered as a defining image inspiring the French revolution.

David used tripartite composition and one-point perspective to organize this picture, with the vanishing point being the focus of this climax. (Fig.3) Figural style was based on Roman Classicism. Forceful and deliberate, the meaning of loyalty to the state and the dedication to a cause worthy of their death was eloquently communicated by composing a picture in an unambiguous and rational manner. 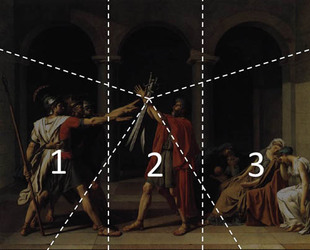 Fig. 3 Jacques-Louis David, Oath of the Horatii - compositional analysis
This picture was considered “real” in the sense that the technique in representing 3-dimensional space on a 2-dimensional canvas was impeccably executed.  The 1-point perspective of the room was convincingly natural; the human figures were well proportioned and anatomically accurate.  Masterfully applied shade and shadow further enhanced the perception of depth in space.  In other words, centuries of good painting techniques were skillfully applied in the most straightforward manner.  However, just like Lorrain’s landscape paintings, this entire picture was a result of an imagination, drawn up with convincing realism to serve as an illustration to convince the viewers at their first glance.

Natural Realism
Rational realism influenced even mythological figures paintings of the mid to late 1800s.  This approach celebrated a pursuit of originality with life-likeness realism to illustrate legendary imageries.  “The Birth of Venus” in 1879 by Bouguereau (Fig. 4) belongs to such genre.  The French Academia supported such an approach of technical excellence and considered the painters producing them the defender of the orthodoxy well into late 19th century. 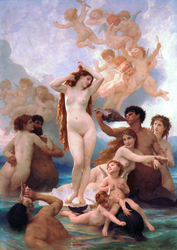 Trained under the academia tradition, Jean Auguste Dominique Ingres inherited such tradition but his keen observation of the physical world and his ability to record it faithfully surpassed most of his contemporaries.  Realism under Ingres reached a new height of life-likeness with breathtaking color accuracy and detail.   His mastery of the human form and his eventual distortion of it earned him the reputation of the great portrait master in mid 1800s. 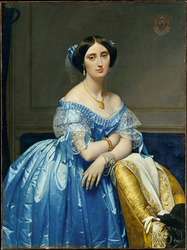 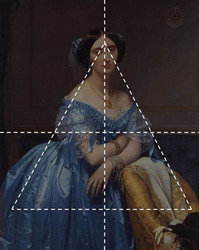 Since Raphael, life-like imagery had been the ideal pursuit of European painting.  Ingres portraits were very life-like and he produced some of his masterpieces later in his life.  “Princess Albert de Broglie” is an example of his later work. (Fig.5&6) Ingres portraits were classically composed with absolutely accurate perspective.  He employed soft lighting to render his picture with an even tone and luminous glow.  Such pictorial beauty was a demonstration of how Ingres had perfected the tradition of highly blended brush stroke producing crisp details of the physical materiality.  Looking at the picture closely, one can almost feel the texture of the fabrics.  It is daunting for us today to imagine a paintbrush alone could create such a tour-de-force in realism.   Ingres natural realism can indeed rival today’s best photographic prints.

Despite such achievement with all its elegance and beauty, these paintings failed to convince a young group of artists who believed Ingres portraits were too rigid and emotionally remote.  To them, these portraitures were too frozen in their luxurious elegance and Ingres had failed to penetrate beyond the physical beauty to reveal the inner psychology of his subjects.

At the same time, photographic advancement 1870s opened up for the first time a means to optically record our physical reality with speed and accuracy.  While painting of natural realism had reached a high point as demonstrated by Ingres work; perfecting it in painting under the context of rapid photographic advancement had become increasingly a mute point; and seemingly a dead end.  The situation prompted an intense debate among the young artists on the idea of realism and gave them the energy to search for new direction to break away from centuries of painting tradition.

With only a few paintings we have discussed, we can hardly conclude the status of European painting up till the late neo-classical period.  Broadly speaking, however, one can established some major characteristics of paintings leading up to the early 1850s.

Subject matters were uplifting and beautiful, ranging from mythological figures to prominent social figures to visionary scenes of highly imaginary reality.
Three-dimensional quality based on the application of perspective principle.
Classical composition arrangement is based on tried and true tradition, often times with triangular and stable hierarchy.
Brush stroke were highly refined and blended and were typically employed to provide a smooth transition between colors.
Realism was the goal with excellent shade and shadow with exquisite detail to portray to the natural world.

In chapter 2, we will discuss how a new generation of painters had turned away from historical imageries and began to explore new subject matter to reflect their own time.
Loading...