Prior to Renaissance, medieval paintings were relatively flat and two-dimensional.  They were generally more pre-occupied with religious iconography than reproducing human visual perception.  But by 14th century, the growing humanist cultural movement in northern Italy had prompted many leading artists to re-consider the function of paintings.  Biblical characters once dominated the entire picture gradually gave way to the inclusion of the natural world.  Painting, which had preoccupied itself for centuries in the depiction of the supernatural realm, was increasingly regarded simply as a window through which one could look straight into the natural external world.  This new vision demanded a profound transformation of drawing technique, which led to the revolutionary development of linear perspective by which the external world could be recorded realistically and objectively.

Linear perspective was a method of illustrating three-dimensional space on a two-dimensional plane.  The principles of linear perspective was first introduced by Florentine architect Brunelleschi at around 1420s and further developed by Alberti in 1430s.  Their work demonstrated that by following a set of geometric rules, three dimensional spaces could be successfully reproduced on two dimensional picture planes with a result closely resembling human perception.  The technique typically involved establishing vanishing points for parallel lines and calculated foreshortened objects of various distances from a defined picture plane.  The result was so convincing that by early Renaissance, it was adapted as the primary means of visual representation of the external world.

Since art and science during Renaissance were not considered as separate disciplines but linked together by the common ground of mathematics; mathematical perspective principles soon became the single most important impetus for a profound artistic revolution in early Renaissance painting.  Early techniques involving linear perspective, and foreshortening were integrated with scientific knowledge of lighting and human anatomy to attain increasing realism in painting.  Such development were further refined and perfected during High Renaissance by artists such as Leonardo Da Vinci; and later Raphael, who went on to produce some of the most imitated paintings during their time.  Since then, three-dimensional quality based on perspective had become one of the hallmarks of European paintings, lasting all the way until the second half of 19th century.

By 1850s, creating three-dimensional paintings by blending perspective with lighting phenomenon was well understood and had been practiced for over four and half centuries.  The advancement of optics had simplified or to some extent eliminated the needs for laborious manual drafting of light rays in creating a perspective sketch.  An image with accurate perspective can now be obtained by simply tracing over an optically projected image.  Accurate as it may be, insistence of natural perspective in a painting also imposed limitation and restriction of expression.  For young artist who would like to venture outside the tradition, re-considering the three-dimensional qualities of painting was a tempting place to start. 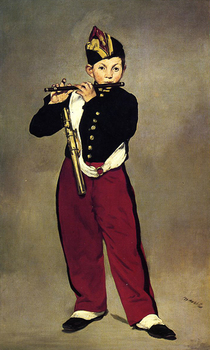 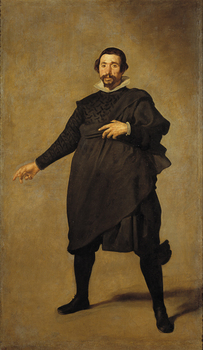 Edouard Manet was one of the first painters to explore discarding three-dimensional qualities in his paintings.  In 1866, Manet painted The Fife Player (Fig.24).  This portrait was clearly inspired by the Spanish painter, Diego Velazquez, who painted The Jester Pablo de Valladolid, also known as “man of pleasure” in 1633.

The basic composition and figural treatment of both paintings were remarkably similar.  Both paintings placed a single figure against a neutral background where ground plane and wall were hardly distinguishable from each other.  To prevent the figure from appearing floating in space, Velazquez provided shadow of the man to suggest his standing on the ground.  Manet took the same approach except the fife player’s shadow was greatly reduced in order to minimize the perception of ground plane and depth.  Such intent of visual depth reduction was also obvious by his application of broad brushstrokes with flat solid colors to avoid painting intricate shade and shadow on the figure as his classical training would have led him.  The result was a flat figure set against an equally flat background.  Clearly, Manet was in favor of producing an image with two-dimensional qualities; and pursuing a new artistic expression beyond the confines of three-dimensional perspective. 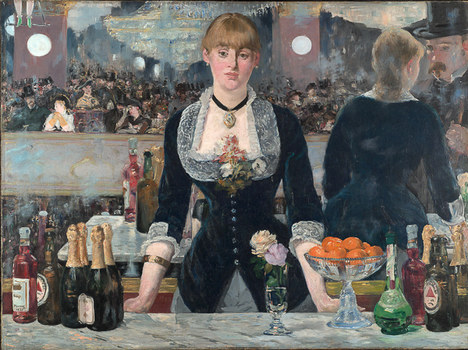 While Manet chose to minimize the three-dimensional qualities and spatial depth in his paintings, his penetrative eye and decisive brush strokes had never failed to portray the depth of his subjects’ psychology.  In 1882, he painted a woman at a bar titled, A Bar at the Follies-Bergere. Despite the dazzling glamour and the endless pleasure of the Paris nightlife, Manet noticed a woman standing behind a bar counter and lost in her own empty gaze.  Many believed that she was a barmaid and doubled as a clandestine prostitute waiting for her clients in the popular variety show venue, Follies-Bergere.  Her clothing and the bouquet of flowers on her bosom seemed to support such claim. Regardless of her status, her facial expression conveyed a sense of lost and loneliness which could hardly be mistaken.

With his typical broad brushstrokes and flat colors, Manet flattened the space similar to what he did much earlier in the Fife Player, albeit in a far more complex spatial setting of a bar interior.  To some critics, the flattening technique had created such visual ambiguity that the painting failed to communicate the exact physical arrangement of the glittering interior.  Some had suggested that the background of the barmaid was in fact a mirror reflection.  This led to much debate about the relationship between the barmaid and her adjacent figures.

On the other hand, it was clear that the intent of the painting was to convey the barmaid’s sense of loss and confusion.  Suppose Manet’s main interest lied not on simply witnessing the barmaid at work, but on how the barmaid saw the world around her.  The outer spatial ambiguity surrounding the barmaid could then be construed as a metaphor to her inner emotional ambivalence.  She was drowned by the fleeting pleasures of her ephemeral surrounding; disillusioned as a barmaid; and lost in her own disorientation.  She felt numb to her immediate social atmosphere while contemplating her own identity in her lonely world.  That was the painful experience confronting this young woman in her contemporary society.  Manet did not let us simply be the spectators in order to conjure up our sympathy for her.  Instead, he invited us to be who she was and to feel how she felt by stepping into her world.  Prior to this painting, we could have never imagined how spatial flattening could unlock such freedom of expression over complex feelings.  Since then, many were inspired to paint not just the external world, but also their internal world of abstract feelings.  This was the wonder of this painting and the last masterpiece of Manet before his death one year later.

By the end of 19th century, three-dimensional qualities as defined in classical European paintings were almost completely gone among the post-impressionist painters.  Gauguin’s Words of the Devil painted in 1894 was a good example. Late Gauguin paintings were among his finest with highly original expression typically portraying the innocence and dignity of simple primitive societies.  What Manet had started with his broad-brush stroke and flat colors was carried out to an almost cartoon like qualities in Gauguin’s work.  Figures were completely flattened with only a hint of shade and shadow.  Spatial depth was only created by overlapping layers of images to create a sense of space between them. 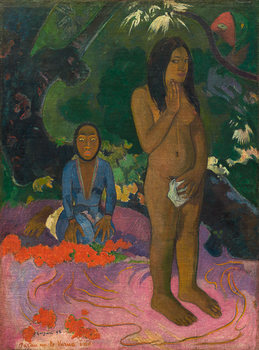 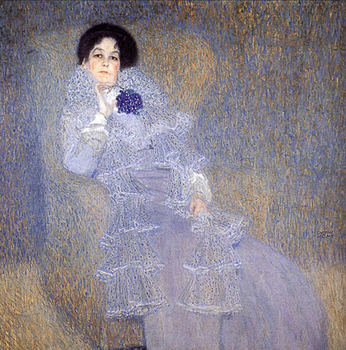 Combining many techniques developed earlier, Austrian post-impressionist painter Gustav Klimt produced some of the most visually stunning and graphical portraiture during the earliest days of the 20th century.  In 1902, Klimt painted Portrait de Marie Hanneberg. The flattening of space was taken to the point that both background and foreground were merged together.  They looked practically indistinguishable.  The painting presented itself with a single plane of flatness throughout.  Only the facial expression remained distinct and thus served as the focal point.  Among post-impressionist painters, Klimt chose to flatten an image in the most literal sense.  The magnificent craftsmanship in drawing two-dimensional details made his work straddling between graphic design and painting.
Loading...